When California’s laid-back and welcoming culture is met with a fierce passion for preserving social justice– you get Oakland: a city consistently ranked as one of America’s “gayest cities”. Oakland’s unapologetic attitude is far from a recent ideology, as the city has been an epicenter for justice during a number of landmark historical events like the women’s suffrage movement, the Black Panthers and the Anti-Apartheid Movement as well as in every day efforts to preserve the city’s culture.

Oakland is a city where residents and visitors alike can feel safe to be themselves thanks to a strong sense of culture and community from allies. Oakland Pride’s co-chair, Carlos Uribe states, “Oakland and Oaklanders have fought and stood up for marginalized communities. Our LGBTQ community is no exception.”

Visitors to Oakland can experience the vibrancy and rich culture of the city’s queer community through its vibrant nightlife, much like many other cities, but what sets the city apart and truly weaves the gay community into the history and evolution of the city are numerous community groups coming together to provide a voice for the city’s minorities.

Volunteer-based social justice organizations like Oakland Pride, Turf Inc., So Oakland and many others are the backbone of Oakland’s mission to preserve its welcoming culture — a mission that these organizations understand could not be possible without recognizing the intersectionality of the marginalized communities that call Oakland, home. Visitors can immerse themselves in the culture through various touch points year-round with these organizations who are out in the community hosting events, offering classes, have a simple open-door policy or an array of others.

As an advocate for these communities and a prominent figure in the Latinx and queer community in his hometown of Los Angeles, Buzzfeed’s Curly Velasquez (feature image above) was invited by the Visit Oakland team to attend Oakland Pride last month and experience the local culture for himself. This year, Oakland celebrated its 10th annual Pride event (celebrated each September), during which hundreds of people lined the streets of downtown Oakland in communal celebration.

“It’s so magical to see so many young queer people of color running around the city. I’m in love, I recognize her (Oakland’s) history, I can feel it in her soil,” Curly said upon arriving to Oakland. “It goes without saying that a lot of our neighborhoods, mine included back in Los Ángeles, are quickly changing and Oakland, much like LA, is fighting hard to hold on to the culture.” 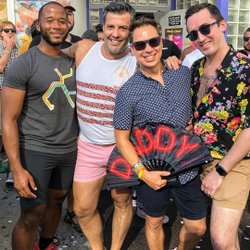 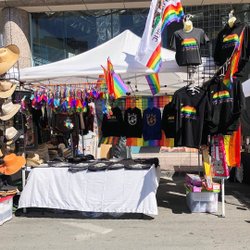 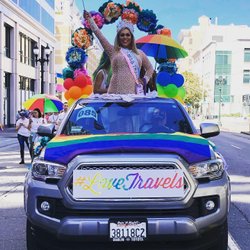 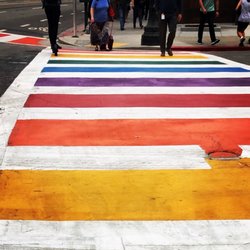 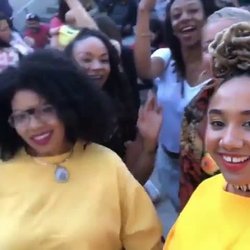 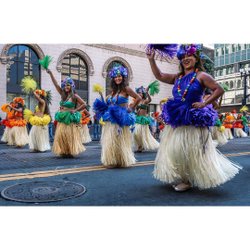 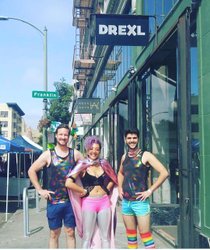 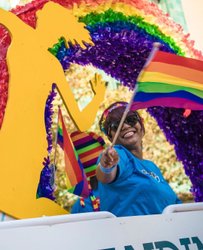 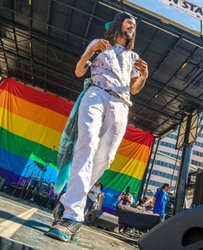 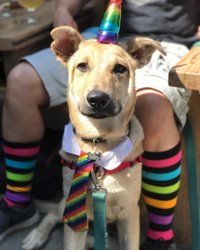 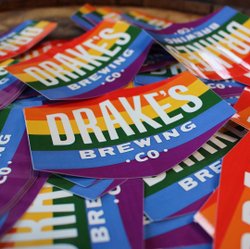 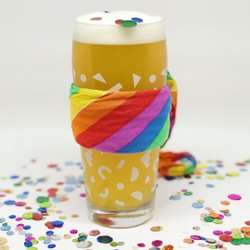 From cultural organizations performing customary dances such as Legacies of the Pacific, an organization which aims to preserve Pacific Heritage, to health and accessibility organizations the East Bay AIDS Advocacy Foundation, Pride brings together many seemingly different organizations and unites them with one common goal: to uplift, protect and provide a voice for historically marginalized groups. We want the message to resound: Oakland’s community provides a haven for anyone to be yourself, without fear or angst.

“Because Oakland’s LGBTQ community is as diverse as the city itself, we are constantly reminded about the intersections of race, gender, class, culture, and other aspects of our identities. For me, being part of the LGBTQ community in Oakland means celebrating those intersections of our identities and fighting for them,” Carlos said.  “I hope to see the LGBTQ community and Oakland embrace, acknowledge, honor, and uplift the marginalized communities that exist within our own community. We need to ensure that all of us are speaking out against transphobia, racism, class inequality, and other issues affecting our most marginalized communities. Pride is more than a celebration; it is about building power through visibility and community.”

Oakland’s Pride also gave community members the opportunity to speak up and voice why they chose Oakland as a place that embraces their identity. One resident, Kin Folkz, the co-founder of the Oakland Pride Run, describes their experiences as a black and Indigenous, bi Queer in the Oakland LGBTQ community by saying:

“I was drawn to Oakland’s activism and commitment to equality-building. I am blessed to live as a queer person of color on Ohlone land and to have the guidance and support of mentors living here like Erika Huggins and Angela Davis, creative geniuses like Blackberri and Marlon Riggs, lovers of and fighters for freedom like Miss Major Griffin-Gracy, Janetta Johnson, Ms. Billie Cooper and Tita Aida. Because of them and many others, I can live my Pride out loud every day.”

As advocacy and giving back become increasingly pivotal ways to connect with the communities of the places we visit, organizations in Oakland are opening their doors by offering community events like Queer and Trans Mic Night at the Oakland LGBTQ Community Center and work-out classes at the Queer Gym, the country’s first gym built for the LGBTQ community, or movie nights every third Friday of the month at the First Congregational Church of Oakland, the nation’s first gay-led church. The city also has numerous volunteer opportunities like leading Queer Yoga nights at the LGBTQ Center, and running a 5k with the East Bay Runners and Walkers, California’s largest LGBTQ walking/running club, taking place this year on October 11, which is recognized as National Coming Out Day. These events and opportunities are all open to residents and visitors alike looking to enrich themselves in the city’s deep history and innovative future, particularly in the LGBTQ community.

When asked to give thoughts on visiting Oakland and experiencing the community’s local pride, Curly said, “I encourage you all to visit! Be respectful, be aware of the history and the culture that has given this city its spirit— be sensitive to the locals who keep it thriving. Support small businesses and the community. It was my absolute pleasure to have been a visitor in such a historic city. Thankful to take your love and your warmth back home with me.”

Looking to learn more about the LGBTQ community in Oakland and what to do on your visit? Check out our Pride guide for inspiration!

Hannah Khan is the founder of Hannah Khan Digital Marketing Strategies – a California based travel, hospitality and CPG marketing company.

Outside of branding, social media management, content creation and influencer marketing for her clients, Hannah is also a traveler, foodie, and linguist.

Get in touch with her by emailing her at hannah@hannahkhan.com